No Solid Answer to 'What’s Next for B2B?'

There was lively discussion and many interesting ideas shared at the Cleveland chapter of American Society of Business Publication Editors’ meeting this week. Unfortunately, but not surprisingly, there weren’t any concrete answers to the panel topic of the day: “What’s next for B2B?”

Panelists included:
Much of the discussion focused on social media and how editors and publishing companies are and can be using these tools to leverage their brands. 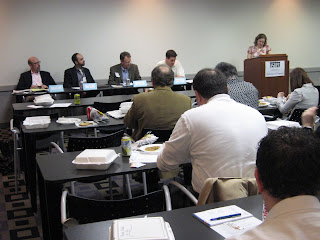 Kievman acknowledged that the return-on-investment figures for social media are still unknown, but he said it’s all about moving traffic. Any effort that goes into social media should be part of an organization’s larger strategy. Establish a goal and drive the traffic generated from Facebook, Twitter, LinkedIn or other tools to one destination.

“Funnel it all to one place where you can capture whatever it is you’re going for, whether that’s eyeballs on a message, traffic to a landing page or a spot where you’re capturing e-mail addresses,” Kievman says.

Jones described Meister’s recent Web and social media developments as “deliberate” rather than “cutting edge,” because many of the publications’ readers are rural and have only recently converted from dial-up Internet to high-speed services.

Over the last year, Meister publications like Greenhouse Grower have upgraded their sites to include Web 2.0 features like video and podcasts. Editors also are exploring social media. They’ve established a social network for readers via Ning.com, and they’re Twittering, too.
The biggest challenge, he says, is staying on top of all the new efforts. To do so, each magazine group has named one editor as an online editor.
“Though it’s not a management-level position, we’re treating this as a leadership position,” Jones said. “It’s more than just data-entry and the mechanics of it.”

Ultimately, it’s taking some effort to get print-minded editors to adapt to the Web, but with some encouraging, they’re coming along, he said. Though they’re not making money off social media directly, the goal is engagement and driving traffic to their Web site.

Pulizzi challenged attendees to think of their top five customers as their competitors. If customers are not already creating content that competes with the industry’s trade magazines, they soon will be, he says. Marketers are realizing their Web sites have to be more than virtual storefronts – they need to provide resources to their customers, whether that includes discussion forums or blogs with best-practices information.

Malley shared that Crain’s Cleveland Business, which sees itself more as a weekly newspaper than a traditional B2B publication, is primarily in cost-control mode due to the economy. The big question is, “What does Crain’s want to be when we emerge?”

Malley doesn’t have the answer, but he says at some point the publication will go all digital – whether that’s in three, five or 10 years, he’s not sure, especially because digital sales currently only make up 1 percent of the magazine’s top-line revenue.

One trend Malley sees is a continued focus on aggregators. For example, Crain’s Morning News Roundup e-newsletter is one of its most successful digital products. It typically only includes a few Crain’s stories and it aggregates all of the business news from around the state.

What does that prove? Regardless of who’s creating the content, it’s incumbent upon B2B publications to deliver what their readers want. As Malley says, “Relevancy matters.”

Great event. It was fun being involved. Thanks for the coverage details!

Thanks for the coverage as well. I enjoyed the discussion.

I agree. It was great hearing so many different points of view on these topics.
Thanks for letting us be a part of it.

Keep Up to Date